skip to main | skip to sidebar

Mythmere gave me permission to share this little artifact from the Mythrus Tower sessions last year, enjoy.
You can download the file to access the sticky note comments.
If you have notes you'd like to add to the map for events or locations you remember from last years game, contact me and we can try to get those added.
https://docs.google.com/viewer?a=v&pid=explorer&chrome=true&srcid=0B0ENvQ09Kp6mM2E5ZjNkY2MtOTIyMy00MjUxLTkyOTktNzZmMzU4MGI3M2U1&hl=en
Posted by Grim at Friday, April 22, 2011 No comments:

Stuff is coming, just slower than I expected.
Posted by Grim at Wednesday, February 23, 2011 No comments:

Take a look at what Norm over at Troll and Flame has done with my roobiks geomorphing dungeon idea. I love it! http://friendorfoe.com/code/geomorphcube/ Great work, Norm.
Posted by Grim at Thursday, April 22, 2010 1 comment:

I've got yet another "All the Dice" generator for Swords and Wizardry in the newest issue of Knockspell (#Four). This one generates magical weapons and I think it's pretty nifty. Run and go get yourself a copy.
Posted by Grim at Friday, April 16, 2010 No comments:

I was looking at my Sudoku Rubix Cube and realized I could use it as a template for interlocking geomorphs. The orientation of each tile relating to a geomorph numbered 1 through 9. I'm going to have to experiment with this idea. Obviously 9 tiles is not enough so perhaps theres 6 sets of 9 since it is a cube. (9-a through 9-f). By manipulating the cube an endless city or dungeon could be generated.
Edit* I was fixing the link above when I came across THIS! Oh hell yes! 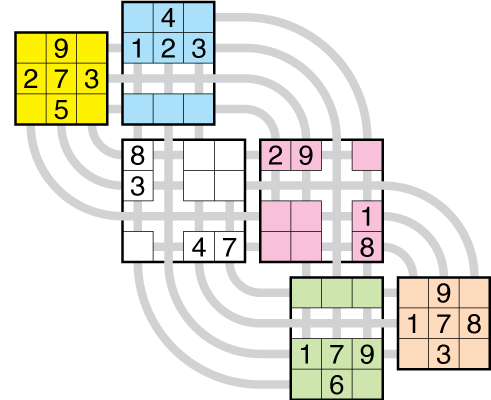 I created this pair of tentacles out of sculpy. woohoo! 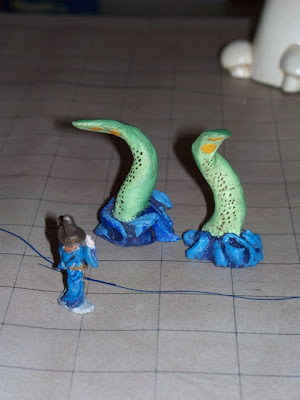 Yesterday saw an 8 hour game in Philotomy's Megadungeon. Actually, we spent a great deal of the session above ground. The updated campaign thread is here http://swordsandwizardry.com/forum/viewtopic.php?f=30&t=537&start=50
This was the first time we've gotten together since before sometime in late spring and it was one of the best yet. We learned a great deal more about PJ's dungeon, and mapped out some new territory. Everybody was making good rolls and the new guy fit in well also. Hopefully we can meet up again soon. PJ was full of surprises this time with lots of interesting encounters. Even letting us draw our own map of an ideal ambush site at one point since we spent time scouting one out. I managed to drop a huge albino ape with a little help from our fighter. A pretty good feat for my puny 4hp Cleric considering it took 21 pts to drop the ape (14 from me on two lucky hits). Mythmere escaped one situation by the skin of his teeth as well, I really thought he was about to bite the farm when nearly the entire party fled some kind of undead thing that he managed to take out single handedly.
Posted by Grim at Sunday, August 09, 2009 1 comment: 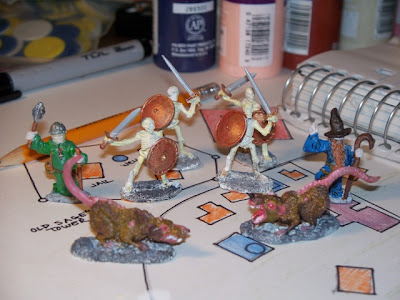 Been grabbing a few mini's here and there for a while now. Here's some Reaper skeletons and barrow rats along with a couple older mini's, "Fat Cleric" and and old school Gandalfy Wizard, I think they are Grenadier). These are the first mini's I've painted since I was about 13 years old, it was a lot of fun and I've done a few more since these but I don't have pics yet. These got an ink wash after this.
Posted by Grim at Sunday, August 09, 2009 No comments:

SPOILERS AHEAD!
So, last night I ran HackHamster's hacked old-school module "Basement of Zenopus" for some freinds. I had drawn up an oversize map to use for Salthaven. A bit of obligatory roleplay around the tavern got our party into the clues they needed to get into frame of mind for the dungeon crawl that was to come.
The group was composed of Dwar and Human Fighters, an Elf Mage, and a Halfling Thief.
Upon investigating the entrance chamber and it's exits they quickly deduced the nature of the illusionary rubble that blocked one of the passageways. Feeling that it must be hiding something, they continued beyond the mirage.
The sleeping goblin in the next room was a bit more trouble. The Dwarf almost bought the farm when the goblin awoke and fired of the booby trap. It escaped into the next area and the party gave chase. A good melee resulted with the goblins therein being slaughtered handily by the party.
After looting the area thoroughly they headed to the next area. Again, not heeding my clues of a spiked door with cobwebs and cold air blowing from underneath it, they pressed on.
The gigantic spiders trap lured them right in... "what's in the bucket?". Only one party member got bitten, the poison was quite lethal.
We ended the game here, agreeing to meet again and continue the adventure.
Main impressions of the system as a DM. The countdown initiative isn't too hard to keep track of, i found myself utilizing a grid and checking off boxes as each second went by. I could see where this would be a good job for a dry erase board, perhaps. Weapon speed took a few go-rounds for the group to get a handle on but they were soon into the groove, "Hacking!", "Jabbing!", "Firing!". Everyone enjoyed the penetration dice and the gritty realistic feel of the combat and felt that it seemed to make more sense than abstract rounds and hitpoints. We're going to keep trying it a couple more sessions but we did discuss possibly switching to swords and wizardy to cut down on math. The good thing is, I could still continue the campaign without really changing anything. :)
Posted by Grim at Saturday, August 08, 2009 No comments:

I'm quite excited to report that I have three games in three days this weekend. Kicking off a new campaign tonight, it will either be S&W:Core + Skathro's Companion or HackMaster Basic. Either is fine with me, I'm letting the players pick, my notes will work either way since we are starting with Basement of Zenopus.
Tomorrow is Philotomy Jurament's game, he runs OD&D and knows the system inside and out. This will be our fifth or sixth session in his MegaDungeon and we have a new player at the table as well.
Sunday is the third session of a HackMaster Basic game that I have joined over at Midnight Comics in Katy. That game has been a hoot so far. We are still learning HM:B but it feels like D&D to me, even with its funky opposed roll system and countdown initiative.
All in all it looks to be a fun weekend of gaming. Hope I don't drive the wife crazy!
Posted by Grim at Friday, August 07, 2009 2 comments:

Grim and bear it